I have finally published the photography book I have been working on for many years. Its title is “Main Street USA”, subtitled “A Photographic Journey to Forgotten America”.

This book of pictures and commentary illustrates something tragic that has been taking place in America for many decades, namely the decline of manufacturing in the cities and towns of the America between the coasts, what I call Forgotten America. It is a story of the sad effects of globalism and outsourcing, the deliberate gutting of the country’s productive manufacturing base, and the resulting devastation of people who deserve better. It is a story as current as the latest headlines.

It all began over a decade ago when I closed my advertising photography studio. I accepted a job teaching photography at a trade school located 100 miles west of the Boston suburbs, my home for almost 50 years.

I had spent most of my adult life in the prosperous cocoon that was, and is, the greater Boston area. It is a region that has largely avoided many economic downturns, due to its concentration of high technology enterprises, military contractors, university research and medical establishments, not to mention many old-line financial fortunes.

The situation just 100 miles west of Boston was another story altogether, as I quickly discovered. Turners Falls, MA, where the school was located, had seen better days. It was once a thriving small city with a solid manufacturing base. Over the years, the companies that once provided good-paying jobs moved their operations overseas, usually China, and Turners Falls declined. On my way to lunch one day, I stepped on a used hypodermic needle on the sidewalk; clearly, something was amiss in this tired old town.

I began to take pictures of the people and places of western Massachusetts, only dimly aware that the region was quite typical of large swaths of the American countryside away from coastal enclaves such as Boston. But it took the death of my wife from cancer in 2009 to open my eyes completely to another tragedy, the globalism and outsourcing that had destroyed places like Turners Falls. 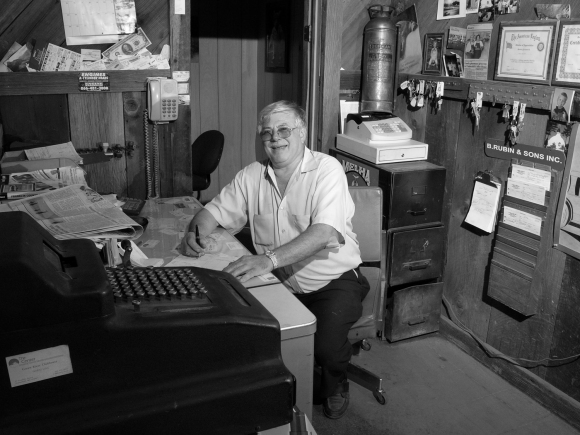 This is an image from the book. It shows Ben in the office of his auto repair business. It looked like a movie set from the 1940’s.

Perhaps as a way to heal the grief I was feeling, or just to get away from the house my wife and I shared for decades, I decided to make photographic excursions into the land between the coasts. I loaded up the car with cameras of all types, added Cory, the Corgi dog I had acquired after my wife’s death, and set out to a series of Super 8 motels in New York, Pennsylvania, Virginia and West Virginia. I made several of these expeditions a year apart.

These journeys were revelations. For the first time it hit me that a kind of sadness had settled into the places I visited; the people had lost hope. Once-bustling downtown Main Street was almost deserted in the middle of the day. The shops had closed, the windows boarded up with plywood. The local movie palace was gutted and turned into cheap apartments; the tenants were barely hanging on. It all became the subject of my camera lens and it felt right to document what was before me.

Another image from the book. This Woolworth’s store was boarded up.

At the same time, I did not want to give in to despair. I made a point of photographing signs of renewal, where it could be found.  Many tired old shops and restaurants hosted friendly people who seemed to be in good spirits, even though their surroundings hadn’t seen a fresh coat of paint in decades. A sense of community prevailed, and in many ways the people seemed happier than the jaded and acquisitive elites of the Boston area.

It took the better part of a year to assemble my work into a coherent book. It has arrived just as these same elites have started to realize the truth of my images, and the story behind them. Perhaps my efforts will advance some much-needed change.

Note: The book is now for sale through Amazon. Just do a search on the title.