During the many decades of my shooting career, a majority of my time was spent doing tabletop photography, what I like to describe as “life on a 4-foot-square of plywood”. I spent my days arranging food, computers, medical instruments and other “stuff” on a sheet of  plywood covered with a surface of some kind,  with a background material placed behind.

The artistic level of it all could vary tremendously, ranging from what we called “plop and pop” photographs of hundreds of pill bottles, each taking a few moments to get in place, to complex arrangements of dozens of objects that might require day a day or more to get just right. I remember one assignment for Stanley Tools in which the art director and I spent hours moving a single wrench on a piece of metal plating until he got it just right, at which point the actual exposure took a few moments and then we were done.

Like all really good photography, the end result looks simple and easy to accomplish, but in reality is fiendishly difficult.

This is especially true when it comes to tabletop photography. In general, the products themselves are not especially photogenic, thus a photograph only reaches greatness when you achieve mastery over lighting and the background or setting. It’s a job for absolute control in the controlled environment of the studio.

I regret that I am now seeing a lot of tabletop photography that fails to meet the standard of excellence that I expected of myself (and others). as photographers and clients attempt to shortcut the whole process. To take just one example, various eBay vendors now sell collapsible light tents that you light up from the outside in a fixed, “boilerplate” configuration, at which point you put the product inside and aim your camera from a hole left in front. This will get you a nice, high-quality snapshot, but not a refined advertising illustration.

To do it well, tabletop photography requires the highest skill in both creative or artistic ability, and technical ability, not to mention an expensive studio equipped with a ton of expensive lighting and camera equipment. It is a skill that took me decades to master and do well.

When I closed my studio there did not seem to be a demand for the exacting tabletop work that sustained me, and I had grown tired of standing in a darkened room day after day. I moved on to less formal shooting, such as portraits and landscapes, something I enjoy immensely.

But recently, the old urge hit me again, and I pulled out the lights and the 4-foot-square of plywood to test myself, and the images are shown below.

I spent two days pulling this shot together. It’s basically a beauty shot but was a test of all my knowledge of styling and lighting. The background was hand sprayed with yellow and blue. The glass received coats of dulling spray, fake ice, fake drips and a final water spray. I tried several “bow-ties” before settling on the one shown. 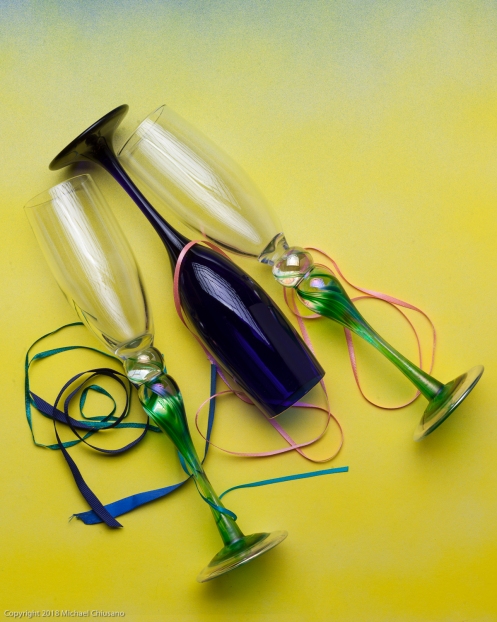 Unlike the above photograph, this shot took only about an hour to pull together. My wife supplied the glassware and the ribbons, and I played with them until the arrangement seemed right. This picture did not just “happen”; it was hard work. 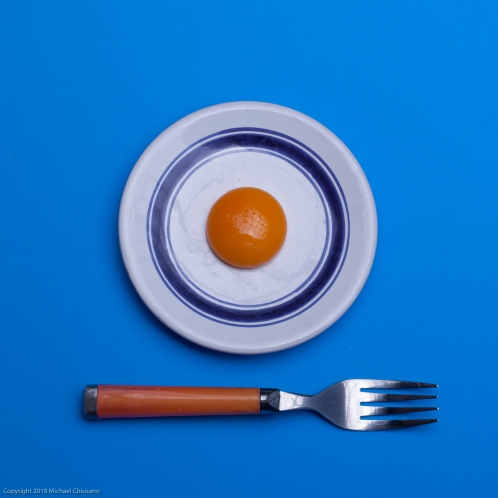 Another shot that looks easy but isn’t. It relies on the color opposites of orange (the yoke and the fork) and the cyan blue background paper. It is formal in its symmetry and the square crop.

Fake apples, a metallic plate and a metallic green background. The shot did not look complete until I added the small sprigs. Sometimes a small detail like that makes all the difference between an OK shot and something truly interesting.